The 21st-century real estate closing is radically different from closings of the past. Since 2011, there has been major acceleration for eClosings or digital closings, and laws and technology that allow eNotary or remote notary processes are the fuel. While I’m sure many of us are still wondering where those flying cars and hover boards a la Back to the Future II are (hey, at least Nike made good on the self-lacing basketball shoes), closings of today are becoming easier and faster to complete.

Here are the latest states that have approved the process, the model legislation that serves as the framework for many states, and some safety and implementation concerns to consider before you jump in.

What is Remote Online Notarization?

For settlement agents, this means that closing on a property doesn’t require all the parties to be in the same room. While notaries are required to be present, signers may be located anywhere with most RON laws.

The Uniform Electronic Transactions Act (UETA) made it possible to use electronic signatures and storage of financial documents in digital formats in lieu of a traditional wet signature on paper. This was the first step in making eClosing and eRecording a reality. Other state and federal laws including the “full faith and credit” clause of the US Constitution, the federal ESIGN Act, and other state statutes act as the legal structure supporting electronic notarization.

All together these laws establish two key principles: 1. Notaries are authorized to electronically notarize documents with eSignatures completed in the presence of the notary (not remotely) 2. When performed in compliance with the laws of one state, a notarial act executed in that state will be recognized as valid in another state, even if those states have conflicting rules and regulations on the process.

What state was the first to pass remote online notarization?

Virginia became the vanguard of the RON movement when Governor Bob McDonnell signed a bill into law in 2011 and implemented the process in 2012. This was the first bill in the country to allow commissioned Virginia electronic notaries to notarize documents online via audio-video technology. Virginia’s law was an integral part of establishing some of the key principles of RON like defining “personal appearance” for a remote closing, how to verify the signer’s identity and the location of parties, and best practices for digital record keeping to ensure the notary seal is valid and tamper-proof.

States that have passed Remote Online Notarization Acts so far

I wrote about how e-recording is changing real estate transactions in 2017, and at that time, only five states had passed remote notarization laws! Since 2011, 23 states have moved to pass Remote Online Notarization (RON) that allows for closing documents to be notarized without requiring all individuals to be physically present in the same room, or even in the same state or country.

Here is the RON status of all 50 states:

Bill Passed but not yet in effect

The MBA-ALTA Partnership behind the legislative push for RON

A lot of progress has been made thanks to the collaboration between the Mortgage Bankers Association and the American Land Title Association to develop model legislation, creating a framework for remote online notarization implementation in any state. Since 2018, ALTA and MBA have been consulting with their member companies and state officials to create a law suitable to a multi-state environment. Based on a refinement of the 2017 Texas statute, the model law, if passed, endows a remote online notarization the same legal status as a notary executed in person.

An organization like the MBA, ALTA, and government entities have been working toward greater standardization for collecting, categorizing, and storing data required for a real estate closing. Every transaction requires accurate and legible data for a successful closing. The Uniform Closing Dataset regulation is another example of this push toward more streamlined data that serves as the backbone of the closing experience for professionals and consumers alike.

From the signing of the purchase agreement to closing day, this model legislation, if adopted by your state, is intended to enable the creation of a fully electronic mortgage experience by MBA and ALTA member companies who choose to go digital.

Some highlights from the MBA-ALTA model legislation:

The goal of this model legislation is to create consistency among state RON laws and align government agencies with other organizations and private companies on the current and ongoing laws and best practices affecting real estate.

Now is the time to start preparing for a digital closing or at least a hybrid of some sort if you aren’t already performing them.

Wire fraud is a huge concern of title agents and real estate attorneys everywhere. Email Business Compromise (BEC) and spoofing is a common way cybercriminals target consumers and settlement agents moving funds between parties. Technology is both a blessing and a curse. With the advent of new closing technology, it’s important for real estate professionals to understand the ways in which cybercriminals could new to dupe you and consumers.

There’s been a lot of buzz around deep fake videos lately, leaving many to question what’s real and what’s not. Sometimes used for entertainment like this video of a Steve Buscemi/Jennifer Lawerence mash-up, this technology creates a convincing scene. Steve’s visage moves fluidly over the expressions made by Jennifer’s face. Of course, the absurdity of this deep fake makes it easy to spot.

The nefarious implications of this technology being used to fake the identity of a contact in a real estate deal might send some chills down the spine of settlement agents.

Just when you’ve got your internal process down to combat wire fraud, payoff fraud, and other elaborate schemes of cybercriminals, now you might not even be able to trust your own eyes as you execute a remote closing over video.

I don’t say this to deter the use of remote online notarization. In fact, I think this is a necessary step in the evolution of real estate closings. But I think it’s important for early adopters to be cognizant of the potential threats. So far, there have been no news stories on deep fakes being used to commit wire fraud. Wire fraud is a threat in every closing present and future, even if you keep it old school.

The Future of RON Implementation

In addition to safety concerns, there are some key differences in state laws despite the efforts of ALTA and the MBA. will need to evaluate the logistical changes required within their internal process to be compliant with state-specific rules before allowing their notaries to perform RON closings.

Even if your state has passed RON legislation, the old way of doing things is still valid and may be preferred by some of your lenders and your underwriters.

In order to fully implement a digital closing, notaries and title agents will need to take note of:

Jason Somers of Fidelity explains more about this dynamic of “many masters” in the title industry.

A straightforward process like notarization becomes more challenging when done with new tools that have a risk of exposing sensitive data. In order to mitigate problems arising from fraud and cyberattacks, more stringent rules, regulations and costs are applied to the remote process. These new barriers and concerns may hamper the widespread use of remote online notarization for now.

However, for those who are willing to take the time to invest in the process, they may find a huge payoff in a market of global consumers who can’t make it to the closing table.

With the right precautions and continuing education, the future of real estate closings and remote online notarization looks bright.

Learn more about how other title agents handle their title production, download our State of the Title Industry Report! 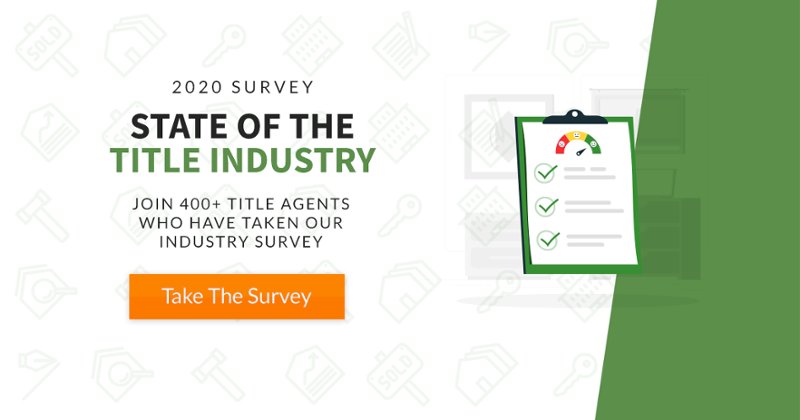 Share
[VIDEO] 7 Things a Realtor Looks for in a Title Company
How Can Title Companies Grow Their Business With Refinances?

Recruitment and Training in the Title Industry
Strategies For Your Business, Company Culture

The latest title industry news. Subscribe to the blog!

Fresh from our Blog