Back to the Videos
Industry News Real Estate Technology

Jason Somers, President of Land Castle Title, LLC, was able to sit down with us to talk about all things newsworthy in the title industry. With more than 20 years in title, he’s seen his share of highs and lows of the market.

We’re continuing our video series with a title expert’s take on popular topics from fending off wire fraud to the adoption of fully digital closings. All you need to do is keep reading.

If you haven’t seen part 1 of this video blog series, Jason addresses the much-talked-about potential recession and how the industry is catering to millennial buyers.

Recently, we had the chance to sit down with Jason, President of Land Castle Title Group, LLC., a Fidelity National Financial-owned company. His career has taken him from working on the underwriter side to working on the agency side. We covered a lot of topics facing title insurance professionals and in this blog, we’re focusing on the all-important topic of wire fraud, moving to a variable cost model, and the future of fully digital closings.

Want to get more insight into other title professionals in the industry? Download our 2020 State of the Title Industry report!

There’s no doubt that artificial intelligence (AI), remote notarization, and digital closings have been a huge topic of interest in the title industry. Florida just passed a law allowing remote online notarization (RON), but Jason says that doesn’t mean it’s going to be implemented by all title organizations immediately. Title professionals are uniquely positioned within a triangle of sorts when it comes to agencies that they must answer to. Beyond the state agencies that oversee them, they’re governed by federal regulations, as well as their title insurance underwriter’s rules and the expectations of lenders.

In Jason’s case, his parent company, Fidelity National Financial, as well as some lenders and other underwriters, have made the determination that they still want that wet signature. He believes that they’re certainly heading in the direction of fully digital closings, but it’s a matter of the underwriters deciding when it’s worth the risk.

Fending off fraudsters with constant education

The challenge with educating title agents, real estate agents, and consumers about wire fraud tactics is that it allows those fraudsters to reposition themselves once they know you’re onto their tactics. However, constant education is still the best armor available to title professionals against the threat of wire fraud. Not to be alarmist, but Jason jokingly says he wants to tell every customer that someone is trying to steal their money, and they’ll probably try to do it through email, so they should be on high alert.

Many people now know that they should be calling a known number — not just the number in the instruction email —  to verify any wiring instructions. Jason brings up the great point that title companies will rarely change their banking relationships, so if you’re getting instructions to send your wire transfer to a new bank or account, that should be a red flag.

In the 2019 State of the Industry Survey, we asked title professionals how they measure success and the number of files closed seemed to be the biggest marker that measured success and efficiency in the life of a closer or processor.

However, Jason says title clearance should be the ultimate measure of success, because it’s at the core of what they’re doing. We know that title professionals are stretched thin with a myriad of responsibilities, but there’s nothing more important than the marketability of title.

Speaking of additional responsibilities, are closers the new salespeople?

In our survey, we also found that closers say they’re tasked with helping to bring in new business to their respective companies and firms. Jason says that at Land Castle Title Group, LLC, they approach it from the viewpoint that everyone is involved in sales in their company. Especially those who are most closely working with the customer, which is typically the closing agent. He says it’s clear when a closer enjoys what they do and sees the value and joy they bring to their customers because they naturally become like a salesperson for the business in their community.

While everyone influences sales in an organization, there are instances where closers are actually accountable for bringing new deals. In this case, it’s helpful to have clear goals that can be measured to determine what efforts are more successful than others. For instance, a handwritten note to a Realtor after a deal may be more impactful at getting more referrals down the line than sending no thank you at all.

Thank you, again, to Jason Somers for sharing his expertise!

Curious to learn about what your peers in the title industry had to say about the topics that are important to you? We’re getting ready to release our second-ever State of the Title Insurance Industry report, but first, we’ll be holding a webinar on Wednesday, July 10th at 11 a.m. to share what we found. If you like staying informed about the industry around you, click below to sign up! 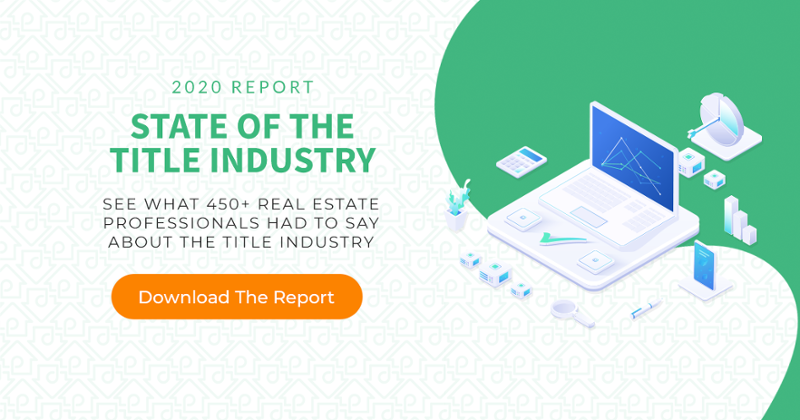